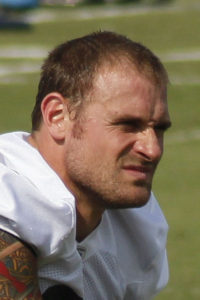 Tenacity is what separates good athletes from great ones. It has been described by coaches as the attribute that is most sought out for because tenacity enables athletes to navigate the challenges they face along the way.

Chris Long was selected in the first round of the 2008 National Football League draft by the St. Louis Rams. He played for the Rams until 2015 during which time, the team never made it to the playoffs. Despite posting good numbers as a defensive end, his destine might have predicted that he was going to be one of many other football players that have never played in a playoff game.

At the end of 2015 season, Chris is signed by the New England Patriots. In his new team, he continued making steady contributions. His new team not only went on the win the Super Bowl defeating the Atlanta Falcons, but he had an active role in pushing the Falcons back due to a holding call against the Falcon’s player. At the end of this season, he signs with the Philadelphia Eagles. Just like when he was playing with the Patriots, the Eagles made it to the playoffs and won the Super Bowl. Long was part of the last two Super Bowl winning teams.

Is it just a coincidence? Maybe. Was he “lucky” that he was playing for better teams than the Rams? Maybe. Was he at the right place at the right time? Maybe. What is NOT a maybe is his continuous drive to pursue excellence. He remained committed to show his best and continued to excel. After signing a nice multi-year contract with the Rams, he could have retired in 2015 and live a financially comfortable life. Instead, he chose to push himself in those arduous training months and seasons. He pushed his “older” body to new heights and contributed to the team he was playing for to his fullest potential.

One is not born having tenacity or not. We develop it. One factor that drives tenacity is to have clear goals that are meaningful. Pursue what really matters to you. See yourself clearly meeting those goals. Navigate each challenge as a learning process and keep moving forward. We all need to learn from Chris Long and our Super Bowls will eventually be ours.