Why anger leads to loss of focus 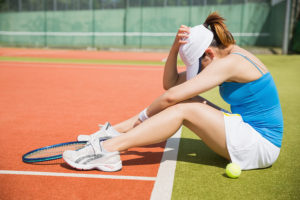 Upset tennis player sitting on court on a sunny day[/caption]The pressure to do well often leads athletes to react in anger. They lose their temper, throw golf clubs in the air, or tennis racquet to the ground. It is also manifested by yelling at whoever happens to be near them, whether it is the referee, opponents, or people seating in the stands.

When working with athletes that tend to lose their ability to manage their emotions, they quite often provide convincing and “logical” rationale for their behavior. “That referee is totally wrong,” or “ the ball was clearly out.” These and many other examples are “reasons” they hold onto to justify their actions.

One of the most notable athletes who was an expert in expressing anger was John McEnroe. He argued with chair umpires, opponents, and anybody else with no regards to how his emotions were being expressed at that moment. Yelling at the top of his lungs was a common trait of his.

Some people argue that the expression of anger could serve as a source of finding or re-gaining focus; others claim that it pumps the athlete to continue fighting. However, one thing is to be annoyed that one’s performance is sub-par; differently is to channel out of control anger.

In his autobiography, McEnroe was self-critical of his misbehaviors. Although he may have benefited in his use of anger by emotionally derailing opponents, he later concluded that such an outpour of anger was also affecting him. His loss to Ivan Lendl in the French Open in 1984 after winning the first two sets was marked by one of his greatest regrets and source of shame. He later concluded that his anger led to his own distractions and the opportunity of winning the French Open for the first time. He disclosed that such a behavior served as a source of self-evaluation and need for change. Just a few weeks later, he played at Wimbledon demonstrating greater focus and emotional self-control. He won the final beating Connors in a convincing 3-setter. Hence, one wonders if McEnroe could have won more slam titles had he used better emotional coping skills.

When displaying anger, athletes show a loss of emotional self-control. They demonstrate to have a limited ability to manage the pressure of the performance. Because “others” are to blame for, these athletes become more avoidant to assume this concern.

If you display anger when competing: